Board your flight from your home destination to Munich, Germany.

This itinerary assumes this to be an overnight flight.

Arrival in Munich, Germany.  Your flight should arrive at the Munich Airport by 11:15 a.m. at the latest for the complimentary transfer at noon.

When the group is complete we head south to your home away from home in HOPFEN AM SEE, on the lake near Fussen (Füssen or Fuessen in German).  Our home base here at the southern end of Germany's famous Romantic Road is within hiking distance of Neuschwanstein in the beautiful Bavarian Alps.

You are staying in a typical local "landhaus", where you are a friend, not a tourist.  Your rooms are very gemuetlich, decorated in Bavarian country style, all with cable TV, telephone, refrigerator, extra sitting area, balcony, and a great mountain view.

You'll be treated to a welcoming Bavarian dinner on the Lake Promenade tonight.

>  Your tour includes: Transfer from airport to hotel, three-course welcome dinner with menu choices, one beverage, and coffee or tea after, overnight at Landhaus Koessel in Hopfen am See

First we go to Marienbruecke (Mary's Bridge) sitting high above the Poellat Gorge, where we can take the best pictures of the castle.  (If Mary's Bridge is closed because of ice or snow on the path, you will be taken to another lookout where you can take wonderful pictures of Neuschwanstein.)

From there we walk downhill for our inside tour of Neuschwanstein.  Afterwards there's time for lunch and a stroll on Lake Alpsee, where young Ludwig learned to swim.

In the afternoon we visit SCHLOSS HOHENSCHWANGAU, the castle built by his father Maximilian, where Germany's fairy tale king spent much of his childhood, and where he dreamed about his future castles.  Local guides in both castles.

Tonight we will have a gourmet dinner in one of Bavaria's oldest restaurants.

Our first stop today is the famous WIESKIRCHE, or Church in the Meadow, one of the few buildings in Bavaria that are on the UNESCO list of World Heritage Sites.

On to SCHLOSS LINDERHOF, Ludwig's beautiful hiding Castle deep in the forest where he spent more time than in his other Castles.  There's time for lunch on the grounds before we visit the inside of the castle, and afterwards there's time to explore the beautiful gardens on your own.  (The Grotto is closed for extensive restoration until 2022.)

Our next stop is OBERAMMERGAU, a pretty village known for the Passion Play (every 10 years, next time in 2020), a tradition which derives from a vow made by the inhabitants in 1633 that if God spared them from the effects of the bubonic plague then sweeping the region they would perform a passion play every ten years. Oberammergau is also known for its Lueftlmalerei (painted houses) and woodcarving.

Today we focus on King Ludwig II's largest castle, HERRENCHIEMSEE, which he built on an island in Lake Chiemsee after a visit to Versailles.  Herrenchiemsee was Ludwig's most expensive project, he stayed here only about one week.

Boat and horse carriage rides to the castle and local guide for inside tour.

On the way back we stop in the beautiful town of BAD TOLZ (Bad Tölz or Bad Toelz in German).  Bad Tolz became famous for its spa.  It also features colourful painted buildings.

There's time to relax before we join the locals tonight for great atmosphere and food at a local brewery.

Day 6  –  MUNICH, including NYMPHENBURG and HOFBRAUHAUS

We go to MUNICH (München or Muenchen in German, sometimes Munchen on the net) and first visit SCHLOSS NYMPHENBURG (Nymphenburg Palace), the summer residence of the Wittelsbacher family, the place where Ludwig II was born, and the Martallmuseum, containing many of Ludwig's elaborate carriages.

An orientation Tour of Germany's Secret Capital features the Olympic Stadium, Olympic Tower, Leopoldstrasse, Schwabing, Ludwigstrasse, Odeonsplatz, Koenigsplatz, Karlsplatz and ends by the Residenz and the Opera, where we get off and continue the last few meters on foot to Marienplatz, the very heart of Munich, known for the carillon in the Town Hall.

It is here where you find one of the best Christmas markets in Germany. Enjoy the atmosphere, find your Christmas gifts and ornaments and have some Gluehwein and Gingerbread.  You have plenty of time on your own for shopping, more sightseeing (lots of suggestions) or enjoying the city from a rooftop cafe.

Dinner tonight at Munich's most famous beer hall, the Hofbräuhaus, where the atmosphere is closest to what you would expect at the Octoberfest.

Today were are heading towards INNSBRUCK, the Capital of Tyrol in Austria.

First we visit the famous Swarovski Kristallwelten in Wattens, then we enjoy a walk through the quaint medieval lanes of Innsbruck, see the little Golden Roof in front of the Austrian Alps, the fine Baroque Church, and take a guided tour through the Hofburg, built by Empress Maria Theresia as a summer residence away from hot and stuffy Vienna.

Dinner on your own tonight.  How about wiener schnitzel in a typical Tyrolean Restaurant?

Today we focus on FUSSEN (Füssen), an old Roman Town on the Lech River.  Walk its narrow streets and lanes and enjoy the details your local guide provides.

Afterwards enjoy a hot Gluehwein and homemade applestrudel in one of Fussen's cosy cafes.

This afternoon we take a short ride to KEMPTEN an old Roman City, about 20 miles away from Hopfen. Admire the baroque Residenz, have free time for great shopping, and spend time on Kempten's gemuetliche Christmas Market.  Tonight enjoy a great farewell dinner.

Transfer to Munich Airport for your return flight home.

Your flight should not leave Munich before 10:30 a.m.

At Mary's Bridge, Neuschwanstein in background

The Landhaus Koessel is located on Lake Hopfen, near Fussen, with beautiful scenery and mountain views of the Bavarian Alps.

Find out for yourself what makes this particular place in the Alps so special that King Ludwig wanted to spend the rest of his life here. 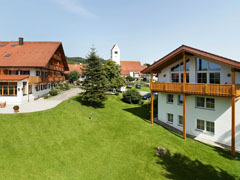 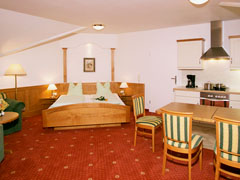 Neuschwanstein on a dull day

There are more pictures of tour destinations in the In Depth section below, in larger formats.  There are three automated Slideshows and a Gallery for selecting and examining larger images.

The Slideshows and the Gallery present the same images in the same sequence, but using different techniques.  The Slideshows are effortless. The gallery has more comprehensive captions.

Other website pages, shared with other tours, also provide in depth information.

Tours
Tours Characteristics
Notes on the distinguishing features of the various tours offered.
What's so special about these tours?  How do they differ from each other?
References
References
Comments from participants in this and other Castles tours
Travel
Travel Info
Clickable links to air and rail travel resources, currency and time conversion, etc.

This Bavarian Castles and Christmas Markets Tour fulfilled our dreams.  My wife always wanted to see the Neuschwanstein Castle in Bavaria Germany.  So after many hints I decided to research tours servicing that region.  As an avid Trip Advisor fan I did a quick search and kept finding consistent 5 star reviews for EuropeanCastlesTours.....

Let me tell you, those 5 star ratings of Astrid Baur’s European Castles tours are well merited.  The hotel accommodations, the quality of tour guides, her comfortable vans, excellent local restaurants serving traditional food, and a well-paced tour itinerary made this the best tour we have ever taken.  We were pleased to have Astrid, herself, expertly guide us for the first two days and then she delighted us with her assistant, Carolin, who led us during the balance of our tour....

As our tour progressed, we felt that Astrid and Carolin were more like “old friends” taking you for a local tour of their country....

We were very pleased with our tour and I highly recommend European Castles Tours.

If ever a couple wanted to see Bavaria at a magical time of the year, highly recommend the Christmas Market tour in December.  My wife and I were treated like family in the wonderful accommodations at the Landhouse Koessel.  The tours to the castles and Christmas markets were well planned with ample time to enjoy the sights.  Thank you Astrid for planning a wonderful tour to enjoy Bavaria with all of its beauty.  My wife and I enjoyed the guides with the European Castle Tour and plan of using the company for our tour this year to Tuscany.

The trip was amazing!  It was our first trip to Europe and my wife had long dreamed of seeing King Ludwig's castles.  Pairing it with the winter backdrop and the Christmas Markets was truly a bonus.   Astrid did a great job organizing each day and making sure there was a good mix of downtime, activities and culture....  We needed a bit of hand holding and have no regrets about utilizing this tour service.  We had such a great time we want to go back and do it again and are recommending it to all of our friends and family.

Astrid has set a high standard to meet by other tour groups....  Everything was taken care of for us and was well organized. We did not have to worry about anything.  Transportation, tickets to castles, where to eat, what to see ... all were taken care of....  Our vans took us to the attractions and then whisked us off from the attraction when we were done to our next destination ... just like a celebrity....  For us, it was a perfect introduction to southern Germany and Austria.   We hope to tour with Astrid again in the future!

We think the design of the Castles and Christmas Markets tour is brilliant, being able to stay each night in the same location, and avoiding all the lost time of check-ins and outs, packing and unpacking.

For us, the highlight was seeing Neuschwanstein, but visiting Bad Tolz and touring the Residence at Kempten were unexpected pleasures and real hidden gems of the tour.  We have already recommended your tours to our travel agent, and will happily recommend them to anyone.

Additional comments on this and other Castles Tours are provided on a separate   References Page .

Comments, experiences and recommendations from guests on past tours are featured in our  References Video

These tours are offered on the following basis:

Tour prices are for the land segment only.  Air fare is not included.

Prices are per person, in U.S. dollars, based on double occupancy.

Single occupancy is available for a single supplement charge, triple occupancy rates are reduced, and there is a special rate for a child 8 to 16 years old sharing a room with two adults.

Guaranteed Departure:  This tour is guaranteed to operate as scheduled and will not be cancelled due to a low level of participation.

A deposit of US $ 300 per person is required to secure a reservation on these tours.

Dates for all scheduled major tours >

This is one of our multi-day Christmas tours.
We also offer a Nutcrackers and Notables tour and Christmas versions of our Black Forest, Alsace and Switzerland tour and our private Berlin and the East of Germany tour.

If our dates do not work for you we can arrange the tour for you or your party as a private tour.  Same itinerary as above in a private limousine or van, with bilingual, professional private guide / chauffeur.  Prices per individual are the same as for the regular group tour, plus a US $ 200 per day private tour premium for the group.

Contact us with your preferred dates and specific requirements at this private tour email link ... or phone one of the numbers below, or write to the address on our Contact page.

Email is fast, flexible, and free. You can write to us at  this email link  (or castles.office@yahoo.com).